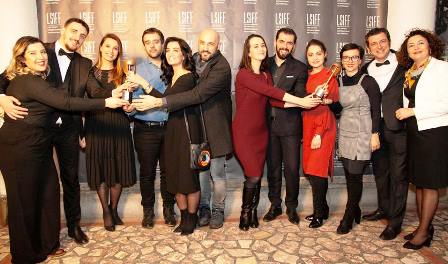 The first edition of the International Short Films Festival ”Life Safety” was held on 26-27 January in Prishtina, which represents a new form of organization of festivals and, through films, it aims to emphasize that life safety and protection are above all in this world.

The idea for this festival is based on the need to find additional ways to communicate, but also to send clear messages to citizens about their life safety and protection. For the realization of this idea through art, the founders found a very simple way, by opening the vacancy to make videos and films with smartphones, where each one can show a story, an event

721 films from 92 countries from around the world competed in the festival. Out of these films, 58 have been selected, which have been shown for two days in the cinemas of the city – ABC and ARMATA.

For this edition, the jury has announced the winning films and success stories by official categories:

Competition program ”Best Short Film” with duration of 1 to 29 minutes.

Competition program ”Best Documentary” with duration of 3 to 29 minutes.

Competition program ”Best Vlog” with duration of 3 to 29 minutes.

Competition program ”Best Success Story” with duration of 3 to 29 minutes.

The awards were given on the Finale night on Sunday, 27 January 2019, at Cinema Armata in Prishtina and it broadcasted directly by the Public Radio-Television of Kosovo.

The awards for life achievements, film and success stories have been given to:

”LIFE ACHIEVEMENT” to the greatest actor/actress, who, throughout the years, has tried and experienced all kinds of recordings (from tape film, VHS format, digital cameras, and now the era of smartphones). This time, this award was given to actress Leze Qena.

”BEST CAMERA” was awarded to the director Chaw Khanawutikarn from Thailand for the Documentary ”Snow Day”, recorded in New York, USA.

”BEST DIRECTOR” was awarded to the director Luigi Russo from Italy for the film ”The Human Resources”.

”ARIF KRASNIQI” is an award outside the competition, awarded by Tempulli College. This award is dedicated to the young generation, as a motivation for creating films and other works from and for the safety of citizens on the road. This year, this price was awarded to Mr. Malë Hoti from the ”Acting School” Eureka Film.

”SPECIAL MENTIONED” was awarded to the director Mehmet Can MICIK from Turkey for the film ”Breath”.

”VËMENDJE E VEÇANTË (SPECIAL ATTENTION)” was awarded to Mr. Admir Molla from USA for realizing the success story dedicated to an Albanian entrepreneur in the USA.

”VËMENDJE E VEÇANTË (SPECIAL ATTENTION)” has been awarded to the journalist Ana Rrustemi from Kosovo for realizing her success story titled ”Valter Success Story”, dedicated to an Albanian entrepreneur in Hungary.

”VËMENDJE E VEÇANTË (SPECIAL ATTENTION)” has been awarded to Mr. Kremtim Krasniqi from Turkey with his story ”Gjuha (Language)” dedicated to our compatriots in Turkey.

”BEST DIASPORA SUCCESS STORY” was awarded to Mrs Arbela Statovci from Switzerland for realizing her success story in Switzerland as female entrepreneur and politician.

“BEST Vlog” was awarded to director Oliver Grüttner from Germany for the film “Two Young Men Shooting a Video”.

”BEST SHORT FILM” (MAIN AWARD) was awarded to the director from India Kishor Laxmi Hambirrao Londhe for the film ”The Captivity”.