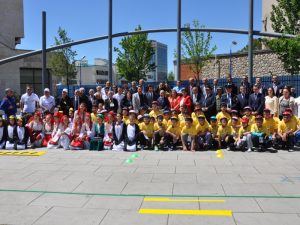 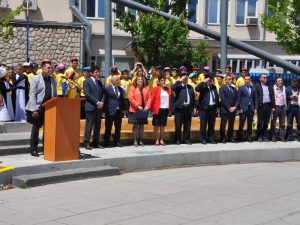 College of Applied Technical Sciences “Tempulli” and Kosovo Association of Motorization –AMRKS along with the Ministry of Education, Science and Technology and with the support of Kosovo Forum for Road Safety, Kosovo Police and the Municipality of Prishtina, organized the fourth edition of the activity “Road Safety”, an traditional activity at the national level with pupils from primary and power secondary schools of different municipalities of the Republic of Kosovo.

This year parts of activity were a total of 20 Primary and Lower Secondary Schools from 6 municipalities of the Republic of Kosovo (Prishtina, Lipjan, Ferizaj, Vushtrri and Mitrovica), and for the process of activity, pupils were divided into two groups:

This edition, as in the past editions was divided into theoretical and practical part.

Theoretical part – Working groups have visited selected schools and have distributed the questionnaires to pupils. Based on the results obtained from the questionnaires, will be published research that aims to identify the main factors that affect the safety of the pupil’s movement during their journey from home to school and vice versa.

Practical part- The main manifestation within the fourth edition of activity “Road safety”, main purpose of which was testing of pupils for technical skills in riding the bicycles.

At the opening of this activity took part high representatives of the state institutions, such as Minister of Infrastructure, Mr. Lutfi Zharku, Deputy Minister at the Ministry of Education, Science and Technology Ms. Anila Statovci and Kosovo Police Colonel Sheremet Ahmeti, as well as other representatives from institutions and national and international organizations.

Minister of Infrastructure, Mr. Lutfi Zharku stated that the Government will continue to further support this important activity for the children of Kosovo. Whereas, Deputy Minister of Education, Anila Statovci-Demaj stated that MEST has a duty to educate children continually, not only in teaching but also for life.

Besides riding bicycles, on the agenda of this event was dedicated a part for entertainment activities for the public. After analyzing the results of the pupils, were announced the champions of this edition.