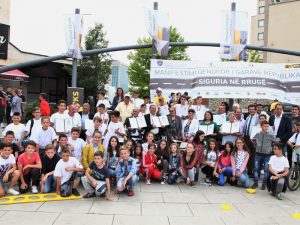 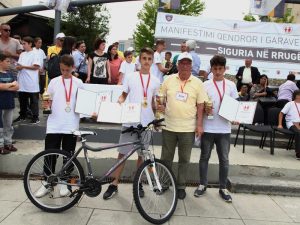 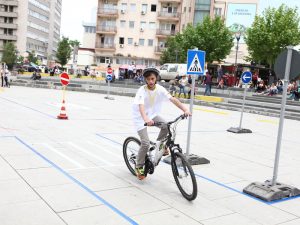 This year, the College of Applied Technical Sciences “Tempulli” and Kosovo Association of Motorization “ARMKS”, in cooperation with the Ministry of Education, Science and Technology and support of the Kosovo Road Safety Forum, organize for the sixth time the Traditional Activity “Road Safety”, which includes primary and secondary schools from various municipalities of Kosovo, as selected by MEST.

Such cooperation between the abovementioned institutions was fruitful with regards to education and awareness-raising among pupils on road safety. At the same time, joint activities helped in identification of pupils’ knowledge on traffic rules and signs. The concerned activities resulted in three researches:

The formula for implementation of this edition will remain the same as in previous years, i.e. this activity will be divided into the theoretical part (visits of working groups in schools) and practical part (bicycle races).

This year, 16 PLSSs from 5 Municipalities of the Republic of Kosovo (Prishtina, Ferizaj, Drenas, Peja and Klina) will participate in the activity, whereas pupils will be divided into two groups:

Working Groups visit participating schools and distribute colouring books “How to move safely on the road” and tests developed by traffic experts for assessing pupils’ knowledge on traffic rules and signs to pupils of grades 1, 2, 3, 4 and 5.

All participating schools selected by MEST should select three pupils each to represent their school, namely from grade 6, 7 and 8, who will compete in bicycle races, which means the testing of pupils for technical skills in riding a bike. The champions of this edition will be announced following the analysis of pupils’ results.

Development of such activities and common action plan for enhancing road safety are also required under the Global Plan for the Decade of Action 2011-2020 of United Nations.

In addition to the bicycle races, the agenda of this manifestation includes also entertainment activities for the public. The champions of this edition will be announced following the analysis of pupils’ results.