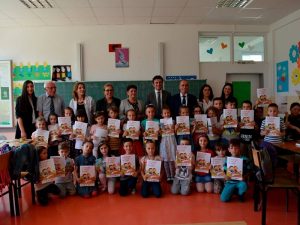 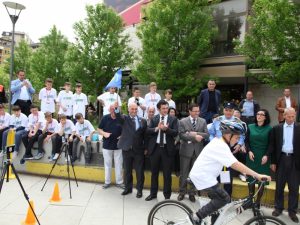 The College of Applied Technical Sciences “Tempulli” and the Kosovo Association of Motorization “AMRKS” in cooperation with the Ministry of Education, Science and Technology and supported by the Council for Safety on Road Traffic, Kosovo Police, Prishtina Municipality and Kosovo Forum for Road Safety this year organized the fifth edition of the traditional activity “Road Safety”.

The implementation formula of this edition is the same as in the previous years: theoretical part (testing of students in schools) and the practical part (bicycle race).

The working groups visited the participating schools (whose selection was made by MEST) and questionnaires were distributed to students for completion. Their testing aimed at assessing students’ knowledge on traffic rules signs.

Each of the participating schools (selected by MEST) selected three representative students, respectively of 6th, 7th and 8th grades to compete in bicycle races, which tested students’ technical skills in bicycle riding. After analyzing the student’s results, the champions of this edition shall be announced.

In addition to bicycle racing, this week also included activities in support of the Fourth UN Global Road Safety Week and the Campaign SaveLives #SlowDown.