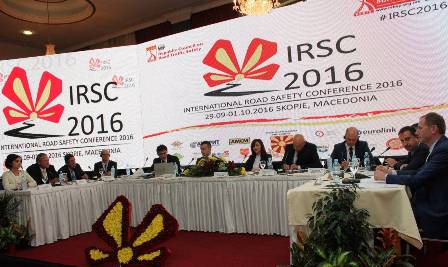 The international conference on road safety “Road safety management in southeast Europe – challenges and actions” was held for two days in a row, in Skopje. This activity was organized by the Council of the Republic Macedonia on road traffic safety, and it was held under the patronage of the President of the Republic of Macedonia Mr. Gjorge Ivanov.

In addition to the officials of the Macedonian Government, the conference was also attended by the executive director of the European Council on road safety (ETSC), Mr. Antonio Avenoso and numerous representatives from educational institutions and various organizations from Macedonia, the region and Europe.

Leaders of the local Council on road safety and representatives/associations of the countries of the region such as Kosovo, Albania, Macedonia, Croatia, Serbia, Bulgaria and Greece were the first to be presented at the first discussion panel. Kosovo was represented on the panel by the Kosovo Association of motorization – AMRKS. At the same time, a considerable number of other representatives of institutions of Kosovo as Kosovo Police, professors and experts on traffic issues attended the conference.