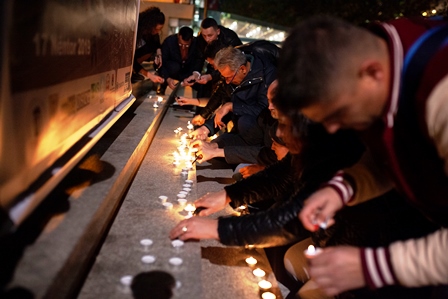 The World Day of Remembrance for Road Traffic Victims (WDoR2019) is commemorated on the third Sunday of November, namely November 17, 2019. The slogan for this year’s commemoration of the World Day of Remembrance relates to Pillar 3 of the Global Decade of Action: Safer vehicles. In addition, it accords with the general theme of the 3rd Global Ministerial Conference on Road Safety that will take place in Stockholm in February 2020 – “Achieving Global Goals 2030”.

This day is marked in order to remember the many millions losing their lives in road traffic accidents around the globe, and to support the families of the victims.

Motorised road vehicles are built to offer users freedom of movement and a sense of personal power through speed. These very properties make them appealing yet risky machines. Human life is not a car part that can be replaced if broken. So, the danger of being killed by them, either through lack of kinetic control or by absorption of deadly exhaust particles, is not a removable accessory: danger is an integral component of their design.

Every year, at least 1.3 million die and as many as 50 million more are seriously injured due to road crashes around the world. To this, we must add an estimated 4.2 million premature deaths caused by outdoor air pollution, many of which result from transport related causes. In addition dozens of millions more people suffer from pollution-related diseases caused in part by exhaust fumes and brake and tyre particles.

This year, for the fifth time in a row, our country was amongst the countries from around the world marking the World Day of Remembrance for Road Traffic Victims, and just like in the previous years in Kosovo, the activities were coordinated by the College of Applied Technical Sciences “Tempulli” and the Kosovo Association of Motorization “AMRKS”, with the support from partners of Kosovo Forum for Road Safety.For the past five years our activities have been regularly posted in the official WDR calendar.

Place: College of Applied Technical Sciences “Tempulli” and the National Theatre of Kosovo-Prishtinë.

Activity: Commemorative march (walking on foot) from Arbëria neighborhood-street Fehmi Agani-the National Theatre of Kosovo, where 97 candles were lit up in memory of 97 persons who died in road traffic accidents so far in 2019.