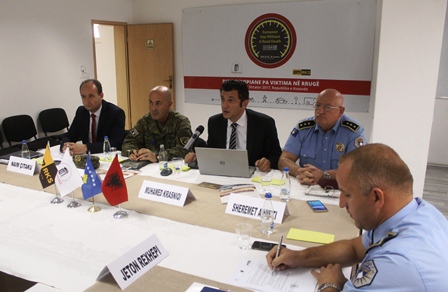 Kosovo marks the European day without a road accident/death

This year, our country became part of the most European countries, marking the European Day without a road death, as well. The College of Applied Technical Sciences Tempulli and Kosovo Association of Motorization “AMRKS” organised a roundtable with representatives from the Ministry for the Kosovo Security Forces, Kosovo Police, Fire Brigade, Centre of Emergency Medicine, Kosovo Forum for road safety, traffic experts, etc.

The roundtable brought together for discussion the representatives from local institutions and actors dealing with road safety and transport issues in the country, whereby among others were also discussed issues such as:

-Actions and concrete measures of the institutions, with the aim of decreasing the traffic accidents in the roads of Kosovo;

-Difficulties in the provision of emergency services in case of road and railway accidents;

-Role of the driving schools on the proper training of young drivers and the impact of media on sensitizing drivers to eliminate road deaths as a consequence of accidents.

Muhamed Krasniqi from College “Tempulli”, qualified the road safety as alarming, by adding that accidents with injured and victims are common.

While, Colonel Sheremet Ahmeti from the Kosovo Police, said that this institution is committed in the provision of the safety for the citizens of Kosovo. He said that the months: June, July and August marked a high number of accidents with fatality.

Lieutenant-colonel Afrim Veseli from nga MKSF said that KSFs are not the first link to provide safety in the road. However, he said that they possess a big fleet of vehicles that are participants in the traffic and their contribution in this direction is that these vehicles are technically in order.

“European Day without a Road Death” was launched for the first time last year, from TISPOL- European Traffic Police Network and was supported by the European Commission.