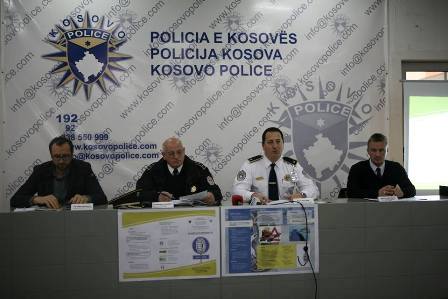 Kosovo Police is already supplied with informational brochures in three languages, which shall be distributed to small and transport vehicles drivers. This activity follows the success of the last campaign through several video clips, named “Do not make this happen”.
Inter alia, this campaign aims at providing necessary information for the vehicle preparation and undertaking concrete measures for a safe driving upon winter season, from 15 November to 15 March.
In addition to the Kosovo Police officers, Colonel Ahmeti and spokesperson, Mr. Kelani, this conference was also attended by representatives of ARMKS and KIB (Kosovo Insurance Bureau), who has funded this activity.