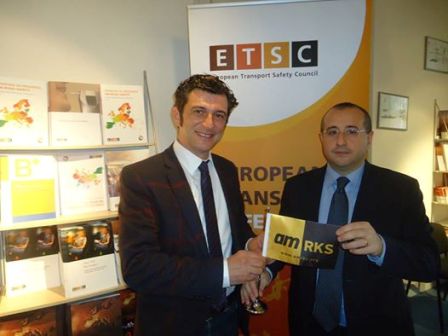 AMRKS is accepted in ETSC

Kosovo Association of Motorization -AMRKS is officially accepted in ETSC (European Transport Safety Council). The high level meeting between the two respective associations of Kosovo and Europe was held at the Headquarters of ETSC, in Brussels. The Executive Director of ETSC, Mr. Antonio Avenoso hosted in a work meeting Mr. Muhamed Krasniqi, representative of AMRKS, and informed him in regard to the decision emerging from the meeting of the ETSC Board, held on 03 September 2014, in Brussels, which states that Kosovo is now eligible to join this Council with the purpose of conducting European level road safety activities in Kosovo as well.

Mr. Avenoso during this meeting encouraged Mr. Krasniqi to organize as many activities as possible with the aim of increasing road safety for all road users. On the other hand, Mr. Krasniqi extended his gratitude to the host of this meeting, inviting him, that as soon as possible, to conduct a work visit to Kosovo. This meeting follows several official meetings between ETSC members and the Kosovo Forum on Road Safety held in Albania, Greece and Belgium.