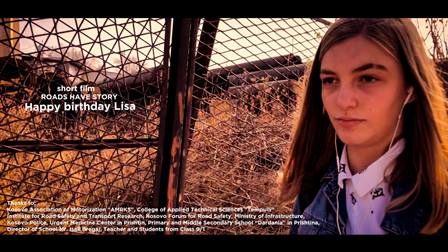 A short featured film “Roads have a history” is launched

Activities under the World Day of Remembrance for Road Traffic Victims this year were held under the motto “Roads have history”.

One of the reasons for selecting this motto is that the roads are more than just a physical link from point A to point B, just like life itself, they carry too stories in themselves, in certain occasions even with a tragic end.

On the occasion of marking the World Day of Remembrance for Road Traffic Victims in Kosovo along with other activities, on 18 November 2018 was launched the short featured film “Roads have a history” – Happy birthday Lisa. The premiere was shown in the open near the National Theatre and broadcasted directly to the Kosovo Public Television-RTK

This film is the result of the cooperation of: Kosovo Association of Motorization “AMRKS, College“Tempulli” , Institute for Road Safety and Transport Research, Kosovo Forum for Road Safety, Ministry of Infrastructure, Kosovo Police, Emergency Medicine – Prishtina, representatives, teachers and pupils of PLSS “Dardania”, the class IX/1.